Author A. H. Kuusela spent her early years in Finland and Sweden where she earned her Bachelors and Masters degrees in management. She then embarked on a career in international development which took her and her family to numerous countries on several continents. In mid-1990’s she settled in the US and now lives with her family in Florida, where she also runs an international consulting practice.
She is a passionate owner of a sweet rescue dog and a regular contributor to animal rescue organizations. She has committed to donate the proceeds from her first novel “Confessions of a Rescue Dog” to the local Humane Society shelter in the county where she lives. She is also an avid writer and poet in the blogging world, and a nature photographer. Ms. Kuusela is in the process of publishing two children’s photobooks, “Little Birds for Little Kids” for toddlers, and “Adventures of the Salt Marsh Birds” for bigger kids. Both will be available in late November.

Here is the link to her Author Page on Amazon.

Author JL Phillips (Jackie to her friends) grew up in the mid-west United States. She now resides in Alberta, Canada with her husband and three pets. Ms. Phillips has always loved to read and since an early age has read and written stories. She has also always loved a good mystery, as one of her favorite authors growing up was Agatha Christie.
Now she writes what she loves to read, a mystery, but with a twist. Her first short story, The Canine Caper, was published as an e-book in August 2015. It introduces her main characters, DeeDee Watson, a female private detective and her loyal sidekick Tee, her pet Papillon dog. Together they get into all sorts of predicaments trying to solve crimes. The second story in the “Deedee Watson, PI series”, A Case of Deceit, is a full-length novel, which was published at the end of October 2015.
Ms. Phillips is also an established blogger. She is now working on her third book in the series, due to be published 2016.

Reach us by email: info@firdemontepress.com

A Treat for All Pet Lovers! Sales Support Animal Rescue! 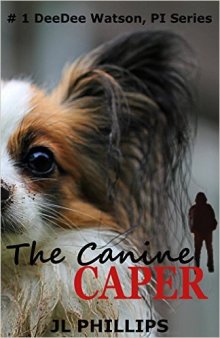 Tee is there again!